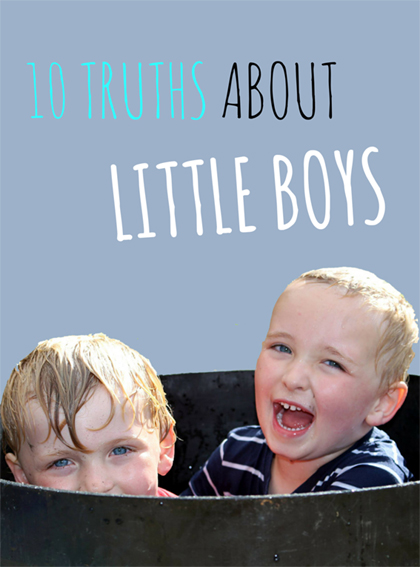 As an all boy mum with two little boys, I am quickly discovering that the tales told to me by my friends and family about the antics of little boys are frighteningly accurate.

Not to say that girls don’t do some of these things, I can’t say I have any experience of what little girls are like aside from some very sketchy memories of my own childhood but that’s not to say they don’t!

However, here are my Top 10 Truths About Little Boys speaking from firsthand experience!

1. THEY HAVE NO AIM WHEN IT COMES TO PEEING 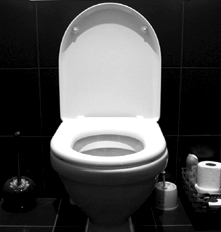 My 3 year old started off so well with toilet training. I bragged about his perfect aim and how he was just so attentive in holding it in just the right position to avoid his pee going anywhere but in the toilet bowl.

Then he got complacent and just plain lazy! Now I am constantly saying ‘You need to hold it!’ (This when he lets go and starts trying to pull stickers off the toilet training sticker chart on the wall). This usually requires a full change of pants, socks and toilet mat. Another is when they are peeing and they hear their name/a commotion/anything and turn around to see what is happening mid flow. Or the latest is the flick. Flicking the pee around the bowl to see where it lands. Boys are gross. And on that note …

2. THEY HAVE A GROSS FASCINATION WITH BODILY FUNCTIONS

No matter how many bribes we try – a trip to McDonalds (this is usually a winner!), park visits, toys, pretty much anything really that comes to mind; we cannot get Master 3 to do number 2’s on the toilet.

He is fully toilet trained for wees (putting aside the fact half of it lands on the floor, the key thing here is he doesn’t wet himself) but poos are a whole other story. He waits until he has a nappy on at night before he will go. I would far rather that than the alternative of doing it in his undies, however the latest thing is to come into the lounge after bedtime to announce at the top of his lungs ‘I have a big problem. I have done a big pooey bum and the colour is brown!’. Then while changing he excitedly asks ‘What colour is it?! Is it brown?!’. Enough said.

Did I mention boys are gross yet?

3. THEY ARE AS TEMPERAMENTAL AS LITTLE GIRLS 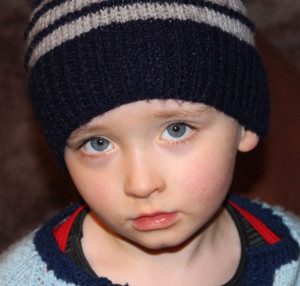 Whoever said that little boys are less moody than girls lied to you. Some of you may be lucky like I was with my first. My second – not so much. He is moody as hell. He is by no stretch of the imagination a morning person. At night he is my bright and cheerful little boy, by morning he has had a complete transformation. Our morning conversations go like this:

‘Good morning!’
‘I want a bottle!’
‘I’ll get it for you in a minute’
*Insert tears and wailing* ‘Bottle mummy’
‘I’m getting it’
Busy in the kitchen getting his bottle that is really a bottle with a sippy cup lid but meh, still a bottle. I heat it in the microwave.
‘Mummy, not hot enough!’
Put back in.
‘Too hot!’
Go down to the lounge where he has to have a particular couch to have his bottle (heaven forbid his brother is on it) and we must carry his bottle down for him, he won’t carry it himself. After the tears that follow upon finding his brother on ‘his’ couch and being forcibly removed we have the next bottle battle.
I send my husband down to the lounge with said bottle.
‘Wahhhhhh! No daddy bottle! Mummy bottle!’
Flat out refuses to take it from daddy. I go down and stand right next to my husband who hands me the bottle which I then hand to him. Of course he happily takes it now cos ya know, it’s logical and all.
He takes a sip.
‘No want bottle!’
Bottle goes flying across the room. So I pick it up and say ‘Ok, no bottle today’
He starts wailing ‘No, my bottle mummy!!! I want my bottle!’
So I give it back. And he drinks it.

One morning I had a realisation: My son is me before my morning coffee.

My 2 year old needs a warm milk like I need my caffeine, then all is right in the world.

As for the older child, he delivered this one to me the other morning after running to the car in the pouring rain. I said to him ‘That was exciting wasn’t it!’ To which he replied ‘No, it was boring’.

So you thought by having a boy/boys you got to avoid the moodiness? Think again.

4. THEY ARE CHEEKY BUGGERS 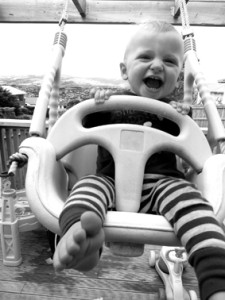 Half the time I don’t even know where the cheek comes from but boy once they know how to talk you are in for some real pearlers!

I tried for aaaaages on Sunday to get my 2 year old to settle down for an afternoon nap and I said to him ‘Shut your eyes’ and he replies with a smirk ‘Shut your mouth’ while smacking his lips together and laughing gleefully. 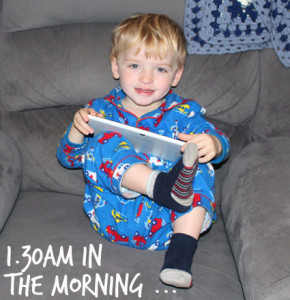 The other morning I was alerted to light pouring into the hallway from the lounge in the dead hours of the night. So I got up to investigate and found this (yes, I went and grabbed the camera!). It was 1.30am. He smiles at me and announces ‘I play Peppa Pig mummy!’ like that is a completely legitimate reason to be up in the middle of the night, climbing up shelves to get to the tablet and then easily figuring out how to get into the game he wanted to play.

*In hindsight I should really add ‘climbing’ to this list because bloody hell will they give you a heart attack climbing up EVERYTHING and launching off, often head first and with no sense of height or danger. Keep that in mind.

5. THEY MANIPULATE YOU NO END

After multiple attempts to get my 3 year old into his own bed one night (he has taken a liking to hopping in ours lately and been returned swiftly) I felt a presence next to my bed again around 10pm.

Yes. He ended up in my bed.

They know what they are doing and you are being played! Don’t fall for it like I do!

6. THEY WILL GO THROUGH A NO PANTS STAGE

It’s pretty cold over here at the moment, nothing like those areas of the world who enjoy the smattering of snow that winter brings with it, but cold nevertheless! Too cold to be naked from the waist down but that doesn’t seem to phase my two year old who will NOT keep his pants or socks on.

Luckily I have been smart enough to continue the trend of button under body suits so we have yet to have nappy removal as part and parcel with this phase, but why one would want to walk around pantless is beyond me. There is hope though, C is the opposite and hates being naked unless he is in the bath, then he instantly wants a ‘blanket’ (towel) wrapped around him and socks on at all times. Finicky they are. Still, from talking to other mums, removal of pants seems to be the overwhelming trend majority where boys are concerned.

Pretty sure this continues into adulthood when copious amounts of alcohol are consumed. Males and nakedness seem to go hand in hand.

7. THEY CAN SQUEAL JUST AS LOUDLY AND HIGH PITCHED AS ANY LITTLE GIRL

Ha! I always thought this was something we could avoid but no. Just no. You’ll see if you haven’t already!

8. THEY START YOUNG ON THE SNORING FRONT

They snore. Loudly. Not only that, they can switch off and go to sleep anywhere, anytime. Like men fall asleep on the couch (show me a man who doesn’t!) it seems to be a special function built into them that us girls missed out on, like an off switch that clicks in when they start to overheat from excessive, non stop movement. And sometimes in the most uncomfortable positions ever as pictured below, almost like the batteries just run out suddenly mid play. Especially in my youngest which was actually kinda awesome!

I should know, I have two little boys with blonde hair and blue eyes but that’s where the similarities end. A perfect example was a recent car conversation one morning on the way to Nana’s house:

Yep, totally different … then we get home that night and before I know it I turn around and they are having a sword fight armed with the tongs and the potato masher.

Different … yet somehow the same.

10. THEY LOVE THEIR MUMS AND YOU WILL LIVE WITH ENDLESS AFFECTION

Prepare to be climbed all over, slobbered and hugged to death. And then wrestled to the ground and jumped on.

And this my friends is why I live on these!

Nectar of the Gods.

If you have little boys, are they like this? Can you relate? Do you live on coffee to survive the mayhem?

If you liked this post then you will probably really enjoy my related posts:

Child vs Parent: Things Children Will Destroy and 10 Phases of Toddlerdom

97 thoughts on “10 Truths About Little Boys”