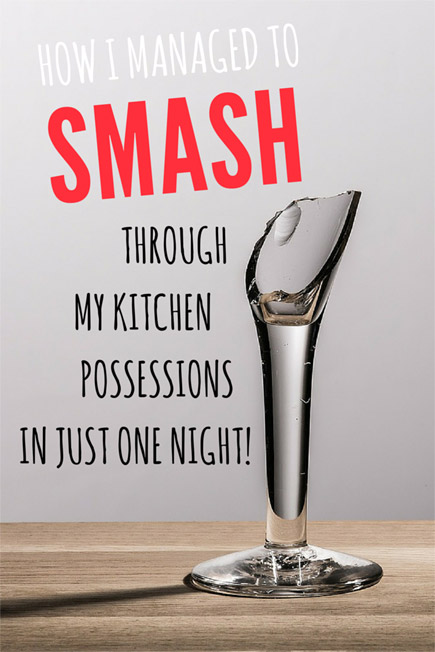 Forget KonMari. The other night I took my de-cluttering mission to the next level!

We’re in the process of building a brand new kitchen. This means walls, ceilings, floors and all! Of course, before that can happen we first had to remove everything to demolish the old one. So armed with 5 large plastic storage containers the hubby and I started to pull everything out one by one and decide whether or not we would keep the item or throw it away.

We worked diligently for half an hour through the appliances. Popcorn maker, blender and mixer got the tick. Deep fryer, milkshake maker and an old coffee machine that was slowly rusting away at the back of a cupboard, didn’t.

We were going really well … and then we had the bright idea to crack open a bottle of bubbly to celebrate the momentous occasion of FINALLY getting rid of our original 1959 kitchen (that’s right, it’s the same one that was originally built with the house! Old wooden cupboards swollen with age and the doors were literally falling off their hinges – it was grotty but as you all know, kitchens do not come cheaply!).

So we clinked wine glasses and chugged it back.

(And before you say it, yes I know I said I was going to quit the booze and I promise I have been really good … except the night I went out with my best friend to celebrate my birthday and we drank a bottle of wine over dinner and a couple of glasses of bubbly over dessert before moving onto a bar where we had a few Margarita’s and then because it was my birthday (and potentially because we were the youngest patrons they had seen at their bar in quite some time!) the barmen gave us free shots! And … yeah. Can anyone say ‘hangover from hell’? The next day my head was not feeling pretty!)

Oh, and the day before where I drank a few high percentage beers, went into the supermarket to buy my birthday cake and walked out with a loaf of bread because I forgot what I went in for and had to buy something to get out … who needs cake anyway right? Bad for your waistline!

Anyway, you can probably guess what happened next!

We moved onto the crockery.

Platters, plates, glasses and mugs were not to be spared! Do you have any idea how much fun it is to smash things? Seriously, you should try it, it is so therapeutic! Forget seeing a psychiatrist for your issues, just buy some cheap plates and smash them to smithereens! We had a big wheelie bin we had brought inside to help with the throw away effort and that ended up being a basketball hoop. Aimed at from the top of a step ladder. If the plate was odd it got tossed (we had a mixture of 4 different sets that had been accumulated over the years). If it was chipped it got tossed. If it was never used or cheap it got tossed. If it was ugly it got tossed. If we’d run out of things to toss but wanted to toss it then it got tossed.

Sadly, the next day we were left with 4 plates, 2 bowls, 2 side plates, 6 cups, 5 glasses, 2 large mixing bowls, 3 nice platters and … 12 wine glasses. You can totally see where my priorities lie! Not just mine but those of my guests (of course!). I totally require 12 wineglasses. Truly.

Though I regret a few of my hasty ‘Let’s just throw it away!’ items that in hindsight I may not have smashed if I hadn’t consumed the wine, for the most part it was a really good approach. I highly recommend it!

If you decide to take this approach, here are a few tips to remember:

In all honesty though, I’m super excited that my new kitchen will give me the opportunity to now shift from a ‘flatting’ style collection (ie. a haphazard collection of things that do not match) to a grown up lady of the manor version of matching plates and bowls! And more than 3 forks, 4 teaspoons and 6 knives (because for some reason, knives never go missing but forks disappear all the time and teaspoons never come home from kindy – yes, I did just buy some plastic ones for this purpose!).

I totally blame my late teens/early twenties flatting days for this disconnect in what is acceptable for a kitchen (not to mention the fact my kitchen was so crappy that I didn’t give a shit and just wanted to haul ass out of there!).

I left school at 18, traveled for several months in the US of A, came home and decided because I had been surrounded by women my entire life it would be fun to flat with men (boys). And actually, it was! I had a few duds (flats, not men … well, actually you could apply that to both!) but I did have one great flat for over two years that I inherited off a boyfriend. I met him on an online dating site and dated him awhile before he told me he was going overseas to America to stay with his cousin and would I like to borrow his room for a few months while he was gone (I was dying to get out of an ant infested flat full of rugby players at this point) so I agreed it was a good idea.

Turns out he actually went to America to stay with his FIANCÉE (who he had also met online!) and who had just left a few months prior after staying with him in this particular flat! How he didn’t think I would find that out I have no idea but of course I did! And his flatmates voted to keep me when he came back so he snuck in and turned off our water. Because, MATURE! Karma is a bitch though and his wife (he did actually end up marrying her) proceeded to leave him for a woman she worked with. Ha!

Anyway, side tracked much?

What I was trying to say was that my life with three male flatmates taught me nothing about how a kitchen should be and taught me the art of laziness – ready made packet meals and a hatred for dishes.

Nothing much has changed!

Despite the fact my Pinterest boards are full of delicious looking recipes just waiting to be made, I can’t cook for shit. I can bake, but I can’t cook.

Now I want to take on the role of a ‘real’ housewife and have matching everything, an overstock of cutlery and the ability to make something from scratch. Can’t be that hard right?!

And in the meantime, forget KonMari – I call this the WineDee method. Drink wine and destroy.

You should try it sometime!

Do you have a well put together kitchen with matching crockery and an overload of essentials? Or are you like me with a haphazard collection of whatever you haven’t broken combined with replacements of a different sort?

26 thoughts on “How I Managed To Smash Through My Kitchen Possessions In Just One Night (Literally!)”