First of all, let me say I am not a natural born event planner or cake decorator! The first couple of years on their birthdays the boys got the token chocolate cake (square, iced and a number shaped candle shoved in the middle). As they have got older I have had to get a little more creative but I have drawn the line at fondant or any other sort of fancy coloured smooth icing and instead adapted to the chocolate theme as best I can get away with.

Then out of the blue the other night Cohen (my 3, soon to be 4 year old) says to me ‘Mummy, for my birthday I want to be a pirate and have a pirate party and a pirate cake!’. I was completely thrown. Since when did he start having an opinion about these things? I thought I had at least a few more years up my sleeve of being able to decide what the cake would be, but apparently not! This birthday gig just got a million times harder. I have already used up the treasure chest idea two birthdays ago (which would loosely fit the pirate theme!) so that leaves me with a pirate ship of some description.

Which brings me to the topic at hand.

For Finley’s 2nd birthday last year I made the easiest boy cake that I could find the inspiration for on Pinterest and today I am sharing my adaption of that with you and wishing I could just repeat it! Pirate ship cake be damned (but at least my attempt will also warrant another post, perhaps a ‘Nailed it!’ version!).

So without further ado, for those with toddler boys looking for something that looks good but isn’t too hard to make, look no further! I bring you the easiest boys birthday cake ever, the Dump Truck Birthday Cake! 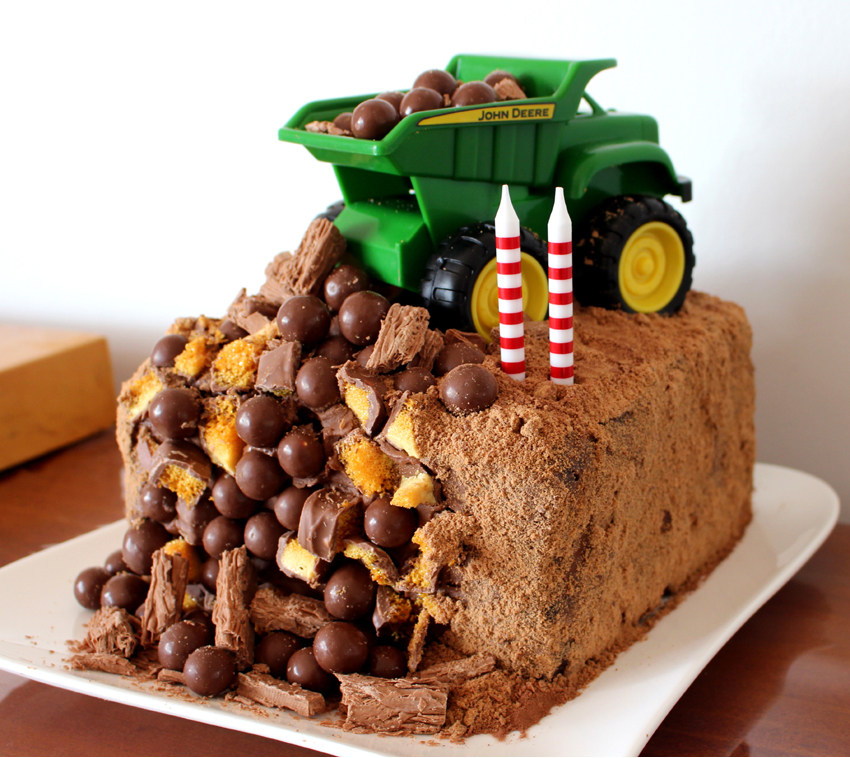 The recipe I used for the actual cake is the delicious and oh so easy Annabel Langbein Chocolate Cake (check out the recipe by clicking on the link!). It is literally a ‘throw all ingredients in a cake mixer and hit the go button’ kinda cake. But be warned it makes a large amount of cake batter! I made it in two square tins and sandwiched them together with icing to make a tall cake.

I always use Nigella Lawson’s Sour Cream Icing (Note: That cake is also one of my go to’s and AMAZING but it is quite a dense thin cake, as opposed to the other one which makes a much larger cake which is what you want for this). Don’t let the sour cream put you off! I know it sounds weird but trust me, it is delicious. Don’t cut corners with sieving the icing sugar or cocoa though or you will end up with a very lumpy looking icing! The reason I know that is because I have done it before, let that be a lesson to you all!

Now onto the fun part!

So what do you need to recreate this:

Two packets of Tim Tams, Chit Chats or similar (for you foreign folk, that would be chocolate coated biscuits with a biscuit middle)

1 x big bag of Maltesers (or 2 to be safe, you can always eat them later!)

Put the two cakes together with just enough icing to hold them and then spread the remainder of the icing all over the cake including the sides.

(TIP: I made the cakes the night before and wrapped them in plastic wrap before putting them in a sealed container in the fridge, this stopped the cake from crumbling and the icing from melting. I also put a strip of baking paper just under each of the fours sides of the cake covering the edges of the plate so you can just remove them after you have finished the decorating and the plate is clean!).

Chuck an entire packet of chocolate biscuits into a blender (I used my smoothie maker) and blend it to a find crumb (you can always do more later if you need it but start with just one packet). This is the dirt. Sprinkle the ‘dirt’ all over the cake pressing into the icing to hold in place. Next, place the dump truck where you want it positioned. Break apart the Crunchy bars and position them under the dump truck and down the side (remove the baking paper from this side now) followed by the Flakes and Maltesers until it covers the side as if dumped by the truck. Insert candles and remove the rest of the baking paper, wiping any excess ‘dirt’ from the other three sides. And you’re done!

See, how easy was that!

If you ever decide to give it a go, I would love to see the photos!

What do you do for your kids birthday cakes? Are you a fancy cake maker or would you rather pay someone else to do it for you?

39 thoughts on “The Easiest Boys Birthday Cake Ever!”