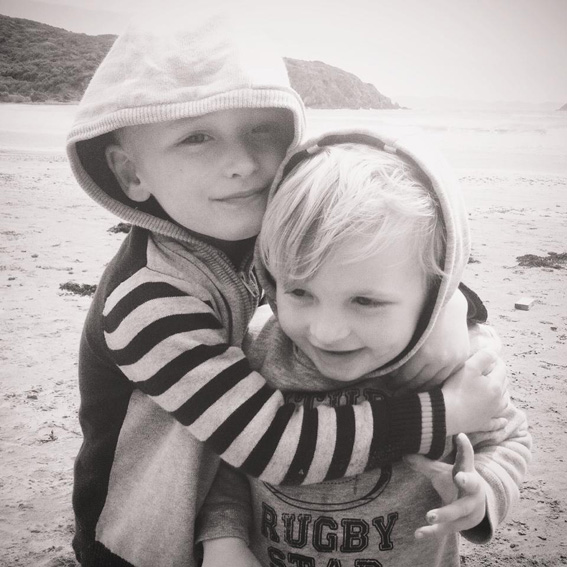 ‘Your boys are going to grow up and leave you and you’ll end up all alone.’

These were the first words that greeted me one morning at work as a regular client of mine decided to start sharing his ‘honest’ opinions about my position as an all boy mama.

This client was an outspoken regular so I tried not to take it to heart, but as a mum of two boys and no daughters, this kind of comment was becoming a regular occurrence.

‘Oh you poor thing, when are you going to try for a girl?’

‘You must be so sad to only have boys’

‘I would be so disappointed if I had only had boys’

The thing is, most mums of all boys have probably heard all of this before.

Once upon a time a baby boy was the coveted sex but it now seems that society has decided that girls are the favoured sex and boys are just too … loud. Boy like.

Boys are stereotyped as loud, exuberant and physical. It appears some in society feel sorry for those of us who have more than one and no girls to balance it out. One is considered ok (after all, you can always try again for a girl right?), two (you must be so disappointed), three (were you trying for a girl? You poor thing), four (are you going to stop now, four boys?!), five (you must be crazy!).

I’m absolutely sure it’s not only boy mums who get given flak, I’m pretty sure dads of all girls probably get the same kind of comments from the blokes at work about being surrounded by women for the rest of his life.

The difference is that all boy mums are often genuinely felt sorry for and I also believe that the current attitude in society towards us is another reason that gender disappointment is so rampant these days in women who do only have little boys.

For some reason when I imagined myself as a mother, I imagined I would have a daughter. To be honest it never really occurred to me I would have all boys! Not in a bad way, I just think subconsciously we often mirror in our heads the familial situation we grew up in ourselves which for me was one sister.

I grew up surrounded by women. My mum and I lived with my Nana until I was five years old, with two aunts close by. And later when my mum married, a ready made older sister (and if she is reading this she will probably laugh for ready made sisters were probably not what each of us had in mind and we didn’t always see eye to eye!). Ironically she also went on to have two boys and I followed suit a few years later. My mum would have been completely out of her depth with four grandsons, never was there a more girly girl than my mum, despite the fact she grew up on a farm!

I have to admit that the fact I will never have a daughter to mirror that mother/daughter relationship that I lost was at one point a source of heartache and I did suffer from gender disappointment when I found out number 2 was a boy. I cried and I mourned the fact I would never have a daughter. I even went to counselling and what I discovered was that it really has nothing to do with having the quintessence girl to play dress ups and do girly stuff with but deep down it was just another platform exacerbating that loss of a close female relationship and comments like these throughout my second pregnancy never helped.

‘What are you having this time?’
‘Another boy’
‘Oh, sorry to hear that … oh well, at least you know they’ll be good friends!’

‘Will you try again then?’

This before the poor boy was even out! No wonder we get a complex.

In my instance I was able to identify the fact that my disappointment stemmed from feeling like my mum had helped me to get pregnant, after a long journey through infertility and IVF to conceive my first son this particular pregnancy had happened instantly so I felt that the pregnancy was a divine gift and that it would be a girl (as nutty as that may sound!). It also became apparent at that time that I had not grieved her death properly and it just opened up a whole torrent of emotion and the gender scan that revealed I was carrying another baby boy became the trigger. Thankfully I was able to work it through and was well over it by that time he was born and what a very special little boy he is. Our bond is amazing and he is a total mummy’s boy, I couldn’t imagine my life without him in it but I still carry guilt for reacting the way I did, even though I know deep down that there was a whole gamut of emotions and circumstances involved.

Still, it has taught me some valuable lessons.

What I have learnt about gender disappointment:

What I have learnt from having all boys:

DISCLAIMER: I’m sure some mums of all girls have probably had there fair share of comments directed at them as well, this is just my experience as a mum to all boys and in no way am I saying that the shoe is never on the other foot.

54 thoughts on “The Truth About Gender Disappointment”