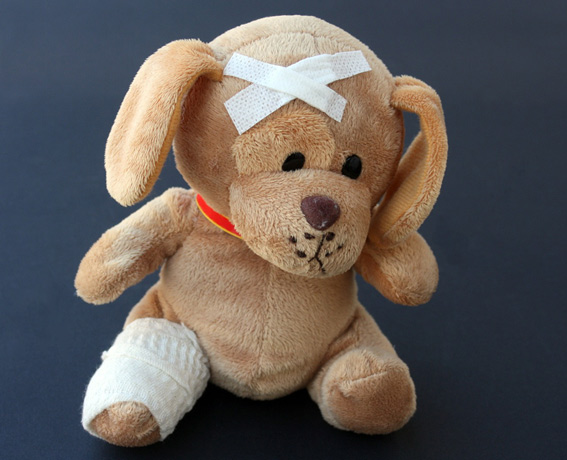 My oldest son is what one might call a hypochondriac.

I don’t know when it started exactly but it’s been going on for as long as I can remember and as he gets older it’s just getting progressively worse.

The tiniest mark on his body and he is crying that he has a hurt and it ‘needs a plaster mummy, you need to fix it!’. It is not unheard of to hear a proclamation of ‘But I’m dying!’ in our household.

Last night he was distraught over an invisible sore foot that is now securely ensconced in a bandage. Yes, that’s right, not a mark on him and it’s wrapped in a bandage. An adult size one at that. It was either that or tears dripping into his 2-minute noodle dinner (due to an epic fail in the kitchen on my part). We then had him back up again five times as apparently one of his toes (on the other foot this time) was mysteriously sore too and needed a plaster.

Once in the lounge he looked down, saw the other foot in the bandage and cried because it was in a bandage and ‘broken’. So really, I have a paranoid hypochondriac with a terrible memory (wonder where he gets that from!).

Recently we ended up having to go to the hospital for unexplained tummy pains. This time I could see he was in serious discomfort and was actually concerned (yes, these days I see my son in tears and take a few minutes to assess the situation before running to his aid all guns blazing). The doctor thinks it was a stomach migraine which is something I had never heard of before but is apparently mighty common in young children, particularly female for whatever reason. It is usually the precursor to adult head migraines, so chances are if you suffer from migraines you may recall unexplained tummy pains as a young child.

Anyway, it turns out that this was the highlight of his life! He was surrounded by female doctors and nurses and couldn’t contain his excitement, he loved the attention from all the ‘teachers’. He was totally in his element during his two hour stay in a hospital bed for observation.

Cohen, would you like to go to the park or beach?

You only go to the hospital when you’re sick

But the hospital is fun and I need to see the teachers! And I am sick.

You’re not sick, we’ll go to the park

But mummy! My foot hurts!

But I have a sore tummy!

Does your child obsess over ‘sores’? Do you put plasters on invisible sores day in and day out? Have you had any hospital stays?