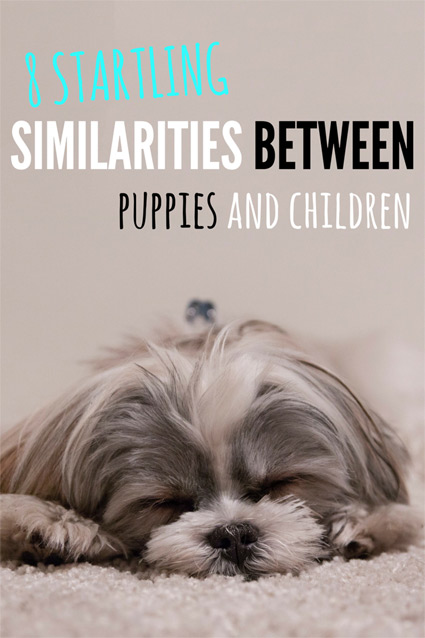 So right in the midst of an epic vent on Facebook the other day about an incorrigible puppy who insists on peeing on the carpet, it suddenly occurred to me that the things I complain about most with this puppy have remarkable similarities to the things I moaned about when my kids were younger (still moan about where the youngest one is concerned!).

Did you know puppies and young children are in fact remarkably similar in many ways?

Here are some of the startling similarities between puppies and young children:

1. They don’t care where they pee

Or shit for that matter. My puppy had a propensity to think that anywhere outside of her crate was free game. The carpet, wooden floor, couch, a child’s bed. It was seriously driving me to the brink of frustration. My miniature little shit disguised as one of the most adorable fluffy bundles you have ever seen, also hates to get her feet wet. She thinks rain is acid falling from the sky and therefore she was point blank refusing to pee in it. She’d begrudgingly walk in it but not do her business.

This scenario is mightily similar to that of both my children who incidentally BOTH refused to poo on the toilet. They’d happily poop in their nappies and undies on occasion but the actual TOILET? Oh hell no. How civilised! Why would they actually want to sit on the toilet and do poos? Why, that would be way too easy on mummy. This way I get to wait for my night nappy and have a valid excuse to get back out of bed! Genius!

And poos aside, why must they aim for IN the toilet basin when they could pee on the floor AROUND the toilet instead? I mean, when you’ve gotta go, you’ve gotta go right? Concentration was seriously not a strong point. It wasn’t deliberate, it was simply that they got distracted far too easily. Thankfully the toilet aim has improved exponentially with age and the invention of a poo city with all the poo houses and poo people and poo pets and poo EVERYTHING that you could possibly imagine could reside in such a place eventually became an acceptable place to ‘send’ their poos by age 4. Thank god for that.

But the puppy? She’s better but we’re still working on it.

2. They don’t want to eat what they’re given

We went from a Labrador (AKA a convenient garbage disposal) who would literally eat ANYTHING that could be considered remotely edible (raw potatoes anyone?) to a Shih Tzu x Poodle princess who thinks that dog food is for dogs and she should eat human food. Our food to be precise. Even when it’s not hers to eat (did you know little dogs can really climb?!). She has been seen to jump up onto the kitchen table and help herself on more than one occasion, hence she is now in time out (crated) at dinner times. A bowl of dry dog food can take her up to three days to finish, one dainty ‘do I have to? Is this all I’m getting?’ mouthful at a time. Only cos she’s probably STARVING to death by that point. Cos we’re so mean.

Children on the other hand don’t want to eat what they’re given either! The ‘good’ healthy foods are not for them. Oh no. They want biscuits. Bread. Chips. Ice-cream. They have been known to climb on bench tops to get into cupboards and steal biscuits. Ironic that the dog wants their meat and veg but not her biscuits, while the kids want biscuits (of the human variety thankfully!) but not their meat and veg! At least they eat their Weetbix though I guess … however, it can take up to 3 days for them to finish the food in their lunch boxes. Snap.

3. Put them in time out and they’ll whine

Speaking of time out … lately my three year old has been put in time out quite frequently for his inability to listen and his propensity to throw a tantrum when he doesn’t get his own way (threenager anyone?). Once he’s in there he will scream and cry and bang on the door to try and get our attention so he can come out. When the dog pisses on the carpet or climbs on the table, she is also put in time out in her bedroom (crate) where she will scream (bark) and cry (whine) and climb up the bars in an attempt to be let out. Sound familiar?

4. They never want to go to bed

Like my children (and most everyone’s children!), puppies are usually not enthusiastic about being put to bed and would rather stay up and play. Thus they tend to complain vocally when bedtimes arises. At least the puppy stays in her bed all the night though! Likely this is only because she is LOCKED IN. Now there’s an idea …

Have you ever tried giving a dog medication? You have to be extremely sneaky, like CIA sly in your ‘disguised in food’ attempt or force it down their throat because there is really no way in hell they are going to say ‘Ok, give me that yummy tablet and I’ll just eat it for you!’. Even if you do manage to hide it like some hide and seek super ninja, chances are they will know and they will manage to spit the tablet part out just to spite you. This is not fun to then retrieve and try again, trust me!

Giving my kids medicine on the other hand requires willpower, patience and strength (the brute kind) because man, these little people can be strong when they really don’t want to open their mouths! Forget medicine cups taken willingly, no siree!

Apparently medicine tastes like the foulest thing in the world to both puppies and children, who woulda thought? At least children do tend to grow out of it though I guess, can’t say the same for dogs!

Let’s see, I have two drink bottles with chewed spouts still in existence, one where the child was the culprit and one which was the dog. They look the same. At least the kids don’t want to chew worn underwear though I guess (UGH! Why do dogs do that?! So so gross!).

7. They want to be on you ALL THE TIME

So kids. They like to sit where you sit. Even when there are two other couches present in the room with no one on them. But no. They want to be on YOUR chair with you. Or your bar stool. Or in your bed. Basically wherever you are, they want to be. Now not only do I have two children sharing my lazy-boy chair, I also have the damn dog! I come home at night and I am piled upon by two little boys AND a dog. Ok, yes, I secretly love the attention because it makes me feel all loved but still.

They’re ALWAYS on you. Always.

At the end of the day, the biggest commonality between puppies and young children is a very simple one – they both just pretty much do what they like whether we like it or not!.

Do you have children and a dog? Can you relate?

Linking up with: #IBOT @ Kylie Purtell and FYBF @ With Some Grace