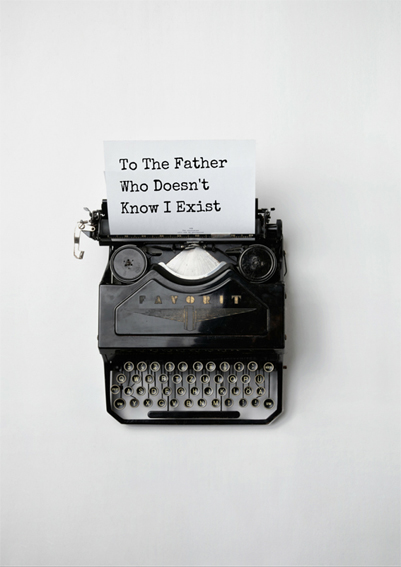 To be completely honest I never gave too much thought to the fact I didn’t know who my biological father was.

The thought would certainly fleet through now and again in the recess of my mind but most of the time it didn’t occupy much space and I could go years without even thinking about it at all.

The fact that you live overseas and you don’t know I exist has always made the challenge of trying to find you just too hard. My mum told me a name once. Literally. I asked and she cried and I never asked again because I was too scared to upset her. I’m not sure why she cried. If she was overwhelmed by the question or whether it was a painful memory. It was always shrouded in such secrecy that I never knew quite what to think.

Did you know she never told anyone who you were? Not her mum, sisters or best friend.

She came home to New Zealand at the tender age of 20, pregnant and alone. I can certainly understand how that would have been embarrassing for someone who was as proud as my mother was, who left with such big dreams of the life she was going to lead and then had that vision turned completely upside down.

The one piece of information I garnered from her was a name: James Maxwell. And that he was English. And the bus driver on the tour she was on.

She says she never told you as by the time she found out she was too far along and it was too hard to try and track you down.

I wondered in later years if that was true or she was trying to protect me from the knowledge that you weren’t interested in being a father. A young Kiwi woman on a working holiday back in 1981, I imagine young unwed mothers were not quite as accepted as they are today. Perhaps it was all just too hard. Or perhaps she really didn’t tell you, the way she never told anyone else.

I tend to believe the latter.

I spent today scouring old albums in search of a clue. They were old scrapbooks that she had painstakingly put together with cut out letters from magazines to spell the names of the places she had visited on her travels. She was young and ambitious and just bursting to break free of New Zealand and experience the world, chasing her dreams and passions of life in the big city of London.

I couldn’t tell from the albums anything but the fact that in the time period I was conceived she was likely on a Contiki tour through Scandinavia. Was this the tour you were a bus driver for? This was in May/June of 1981.

The albums are now falling apart, the scrapbook itself held steady but the photos and postcards are all falling out as the double-sided tape no longer has a hold to keep them in place. Some of the photos have things written on the back but nothing that was of any use to me. I find myself frustrated that she didn’t just tell me the truth before she died. She kept it a secret all her life and took that secret to her grave. Why?

33 years later I have finally decided it is time to try and find you. To piece together the story. Who are you? What nationality are you? What is my heritage? Do I have any half siblings out there? Did you know about me? Are you really my father or is it someone else entirely? Perhaps this name is even made up!

Today sitting in my dining room with the broken down albums and a letter all I had to go by, I questioned my memory and what I know. It’s so little to go on. Do I even remember the name correctly or has it warped with time? I’m pretty sure it’s correct but other tidbits of information I have learnt over the years could not be corroborated in the written word. I thought I learnt them in a diary but perhaps it’s some figment of my imagination or a long forgotten memory of a conversation that has grown withered with time until I can’t quite figure out where it came from.

I will begin my search today.

I don’t have high hopes but I feel like I am being urged to try, some kind of instinctual feeling I can’t explain.

So far I have spoken to a number of people and the story just becomes more sordid and complicated!

From what I have learnt I am inclined to believe that she wasn’t entirely sure which of her suitors at the time was the father. I believe she told one man, Per was his name, that I was his before retracting and saying she wasn’t sure and releasing him from any responsibility. Was THAT you? It would certainly explain the blue eyes my boys have, perhaps some throwback to the Swedish ancestry I don’t even know I have.

Or were you the Englishman she told me, James … or neither. Perhaps there was someone else she met on some sultry evening in the haze of romance and the sights of Scandinavia. She was certainly beautiful enough to catch many a mans eye.

How do you search for someone when you don’t know who to search for or even where to start?

I guess the best place to begin would be to trust. Trust that even though I was just a young girl at the time, that she was truthful in the name that she told me. That having seen me grow and develop into the child I turned out to be, she had seen something in me that gave her the confidence to name you as the father.

I will start there.

At the end of this story I asked for some help on social media to track him down and my post on Facebook was shared over 300 times and seen by 34,000 people all over the world! Thank you so much for all your help! Click here to read an update on what happened …