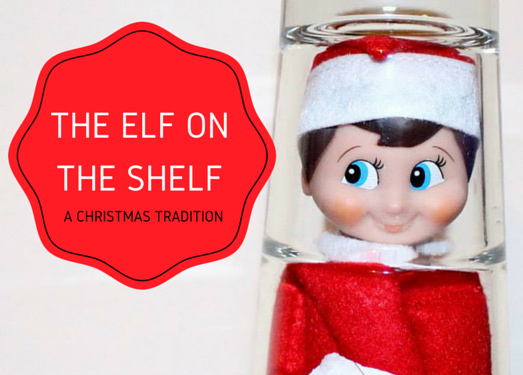 A year or so ago I started to hear bits and bobs floating around the internet about this Christmas tradition that entailed a strange little Elf toy moving around the house and being found in fun and strategically set up scenarios for children to find every morning.

I did some research and discovered that it actually looked like a ton of fun, particularly with two imaginative little boys but they were sold out that year so I got in early the following year (last year) and bought one.

For those who don’t have a clue what The Elf on the Shelf actually is then here is a brief outline:

The Elf on the Shelf®: A Christmas Tradition is a special scout elf sent from the North Pole to help Santa Claus manage his naughty and nice lists. When a family adopts a scout elf and gives it a name, the scout elf receives its Christmas magic and can fly to the North Pole each night to tell Santa Claus about all of the day’s adventures. Each morning, the scout elf returns to its family and perches in a different place to watch the fun. Children love to wake up and race around the house looking for their scout elf each morning.

We adopted our Elf from The Book Depository and called him Alfie (yes, very creative I know!). Alfie joined us for his first December last year and we started off well.

Here’s what Alfie got up to with us last December: 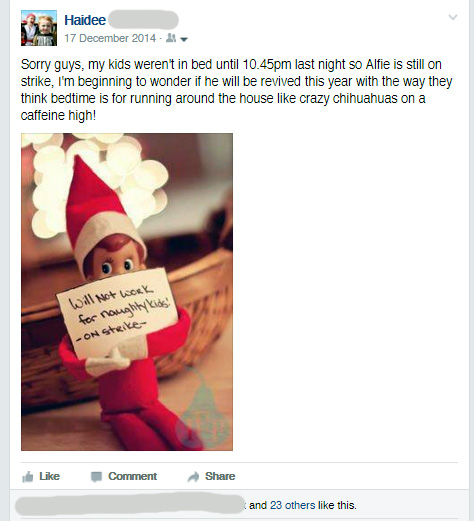 The Elf on the shelf is a very difficult endeavor to achieve when you have children who keep getting up or refuse to go to sleep! You do not want to be up at all hours of the night trying to set this up so my advice to those of you with restless sleepers is to wait a year! Our Elf stayed on strike for the rest of December until he delivered their Christmas Eve Box.

This year we have already started reading the book every night which the kids are loving. Last year the book wasn’t read because the kids weren’t interested but given the popularity of that aspect, I think this year will be a winner! And these monkey’s actually SLEEP at night now! Woohoo! That will make being creative so much easier!

Now, the only problem is that when Alfie was returned home to Santa after Christmas he was tucked away somewhere so safe that he is now lost. Wish me luck on my retrieval mission! Only 3 weeks until he needs to start working his magic (ie. making the children think they need to be good boys and girls or Santa will be told!).

No, I am not adverse to bribing good behaviour, if only for one month a year! Bring it on I say!

Do you do Elf on the Shelf? Have you even heard of it before now? Is this something you would be interested in doing?

60 thoughts on “The Elf on the Shelf”