So the time finally came where I had to deliver on my promise to C and make him his Pirate Ship birthday cake (this was first mentioned when I wrote a post about the dump truck cake I made for my youngest sons 2nd birthday).

The topic of shape hadn’t been brought up for some weeks but the prerequisite for the cake that he wanted was chocolate with chocolate on it. Which to be honest, suited me just fine.

On the way home on Thursday night I made the amateur mistake of telling him what kind of cake he was getting.

‘Cohen, guess what! Mummy is making you a Pirate Ship cake for your birthday!’

‘But I don’t want a pirate ship cake, I want a circle cake’

‘I don’t have any circle cake tins so you can have a pirate ship cake. It will be awesome!’

‘You’re getting a pirate ship cake’

‘Ok’ (this was delivered with reluctance)

Damn it child, I have not spent hours on Pinterest researching Pirate Ship cakes to then make a circle cake! And I don’t want to have to go searching for circle cake tins.

Once again I used my two favourite recipes – for the cake the Annabel Langbein Chocolate Cake and for the icing Nigella Lawson’s Sour Cream Icing. You can read the tips related to those in the Dump Truck Cake post where I go into a bit more detail.

However I must admit to maybe messing the icing up a bit this time around by accidentally doubling (ok, more than doubling!) the butter! Don’t ask me how, I think I have told you before that attempting to bake with small children is a disastrous idea! In the end I just kinda winged it and it turned out awesome so there is hope in that! I added a tablespoon of cocoa this time too to make the icing darker as often it can be quite light in colour. I’ll list the ingredients of the accidental icing at the bottom as it was smoother than usual and probably paid off in the end by going on the cake easier! And there was a shite load of it which is never a bad thing. In fact I think I will mess it up every time from now on. Just don’t tell Nigella!

So without further ado, here was the end result! 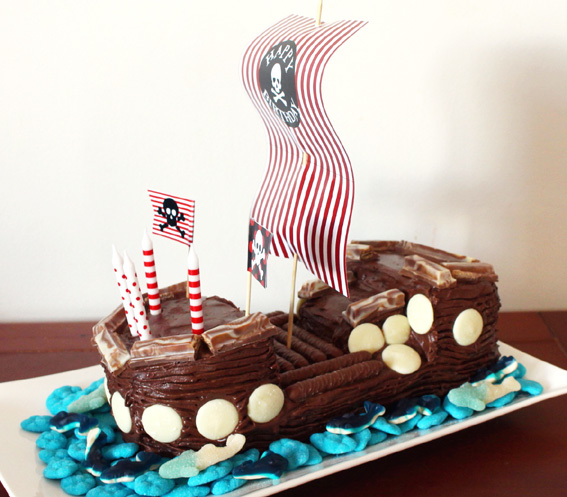 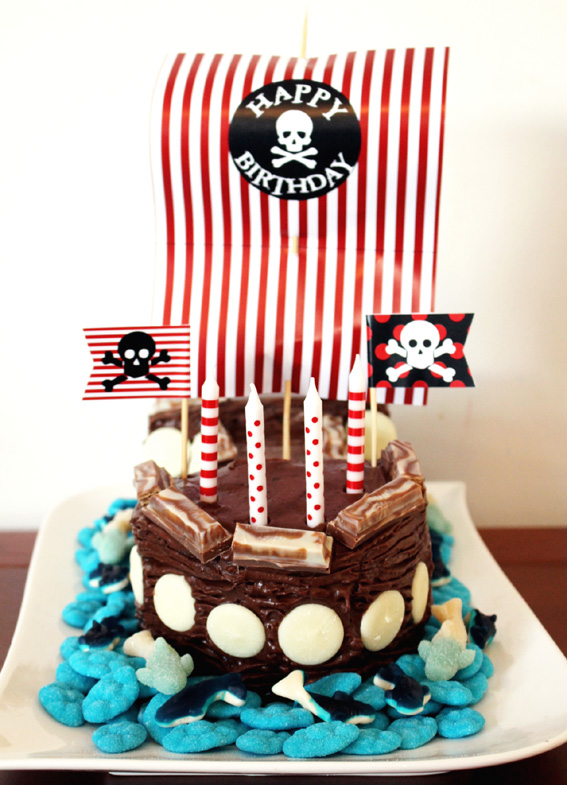 To make the pirate ship shape (say that fast 5 times!) I used two square cakes and cut off one of the edges to make it narrower. I then used the off cut of the first cake to lengthen it at the front and the off cut of the second cake to lengthen it at the back, making it longer and more rectangular. I used the rest of the second cake as a second layer for the front and back and for the step (which I cut down to be lower).

I used a knife to shape the front by rounding off the corners before covering the entire thing in icing using boiling hot water to dip the knife into intermittently to get it to go on smooth(ish) and ran a fork around the edges to make the ‘wood’. Once you have done that you have the fun part of decorating it however you please!

I used marbled Kit Kats, Chocolate Finger biscuits, white chocolate buttons and lollies around the edge as the ‘water’ – Blueberry Clouds and gummy sharks/sugar coated fish. I did try convincing my son that a rainbow ocean would be cool (pebbles) but no, he wasn’t having a bar of it. Oceans are blue and that was the end of that. Whatever happened to young imaginations! If your child is less literal you can probably get away with that!

Finally, the flags were free printables I found via Google – the ship sail from Frugalful which you can get here and the smaller flags you can find here. I then printed them at work on a 160gsm paper stock (120gsm would do though) and threaded the large one through a bamboo skewer for the sail (as per instructions on the site). For the smaller flags I snapped two skewers in half and just folded them over the top of the sticks with double-sided tape on the back of each flag to stick together, then shoved them into the cake.

I was pretty proud of my efforts and the birthday boy loved it (yes, even though it wasn’t a circle!).

Melt butter and chocolate together (I melt the butter on the stove and then add the chocolate after taking off the heat and the heat of the melted butter melts the chocolate but do stir it continually!). Let chocolate mixture cool down and sift the icing sugar and cocoa into another bowl. Add golden syrup to the cooled chocolate mixture followed by the sour cream and vanilla (it does go quite a hard consistency, this is normal, don’t panic!). Add the chocolate/sour cream mixture to the icing sugar and mix together as best you can before adding a teaspoon of boiling hot water to start and then adding little bits more until it is the right consistency (go slow on how much you add, you don’t want it super runny!).

What was the last birthday cake you made for someone, kids or otherwise?

Once again linking with the lovely Jess for #IBOT today!